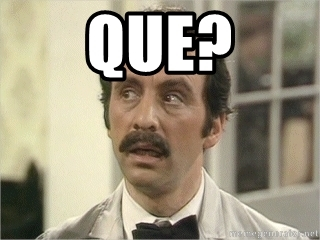 Any other languages you fancy ‘Good Morning’ me in? (😂😂 I’ve just noticed that Facebook seems to have auto-corrected one of my languages whilst it was posting – Jo Reggelt!)

Many years ago (so many now it makes me sigh deeply 😔), I used to live in Hungary. I don’t know if you know anything about Hungarian but, let me tell you, it is a Ridiculously Difficult Language to learn!

There were many, many times when I felt a little like Manuel – que??? I managed to learn some and was able to get by in the shops and stuff, but never really made it past beginner level.

And so, when one day I was on the tram and spotted a group of tourists looking lost and confused (we were at a tram stop and they got on, got off, got back on, got back off and then got on again, huddled around a map and pointed lots), I decided to step in and see if I could help.

The tram had, by this point, set off again (not surprisingly). I had heard them talking and had ascertained that they were Australian, so I somehow managed to get the attention of one of the group and asked, “Are you lost?”

She then turned back to her group of dithering, seemingly lost friends, muttered something and then another one of them turned to look at me. I took a deep breath and tried again. “Are you lost?”

Finally, a glimmer of understanding, followed by this (spoken Very Slowly and Quite Loudly): “Oh, no, we’re just stupid!” 🙄

I was utterly baffled as to how the first one I’d been asking had so spectacularly failed to understand me. I mean, I was used to people struggling to understand my accent, that was not something new. But these were people whose first language was English and I only said 3 words. 3 words!! How can you not understand 3 words?!!! But then, as I thought about it some more, I wondered whether maybe she’d not understood me because she was not expecting to be spoken to in English. They were in Hungary, land of the ridiculously difficult language; they weren’t entirely confident in their situation. And then I spoke to her in her own language. And it may only have been 3 words but she was not expecting it and so completely missed that those 3 words were actually words she understood.

Amen and a szep napot to you all!